Warning: Creating default object from empty value in /home/customer/www/maojianhua.com/public_html/wp-content/plugins/instapage/InstapageCmsPluginHelper.php on line 114
 The Timeless Dance. Beyond the mountains - Mao Jianhua

MOUNTAINS Secret Harmony of the Earth

Secret Harmony of the Earth

The mountain resonates its contrasted melody, amidst the very high notes of the rocks, extending upwards towards the sky, and the gentle murmurs of the wind below, amidst water and fog.

“In Mao Jianhua’s landscapes, we rediscover the long, tortuous layout of river streams flowing through bights amidst tree-lined countryside, but mainly mountain peaks that soar impervious and steep, often rising through soft and blurred patches of fog. The meaning of the nature that inspires and guides the artist is indeed a spiritual state, which has little or nothing to do with a “realistic” representation of reality, but rather it demands a transcendence towards abstraction, which is expressed in an ascetic stylization of the forms in an inflexible austerity of the range of colours.
It is on the Yellow Mountains that he found his own, personal path to Shan shui painting, tending with inexhaustible and keen devotion to every aspect of the creation: from the support (paper), to the tools (paintbrushes), to the range of colours (inks). Mostly limited to black ink on a white background, and thus strongly Minimalist, Mao Jianhua’s technique consists of decisive strokes, which, with prodigious efficacy, combine the lightness of the brushwork to powerful construction. The technique that he chose to work with, ink on Xuan handmade paper, made from the bark of sandalwood, and has forever been used for writing and painting.
In Mao Jianhua’s paintings also music plays an utter and profoundly relevant role. In order to fully decipher this concept of the “unity of the arts” in all of its complexity, it may be of help to look back at the ancient cultural traditions of Imperial China, in which the different art forms were believed to have originated from the same nucleus of inner creative life, at the supreme state of being.
The music of the guqin presents nature through sound, while painting does so in the form of images, by means of lines and colours. And in pursuing its harmony with nature, the music of the guqin helps the listener to come into contact with his or her own spiritual existence and inner growth. This is a source of inspiration for Mao’s painting, which is expressed when he seeks and achieves harmony between his own vital rhythm and the rhythm of the mountains and of the rivers.” 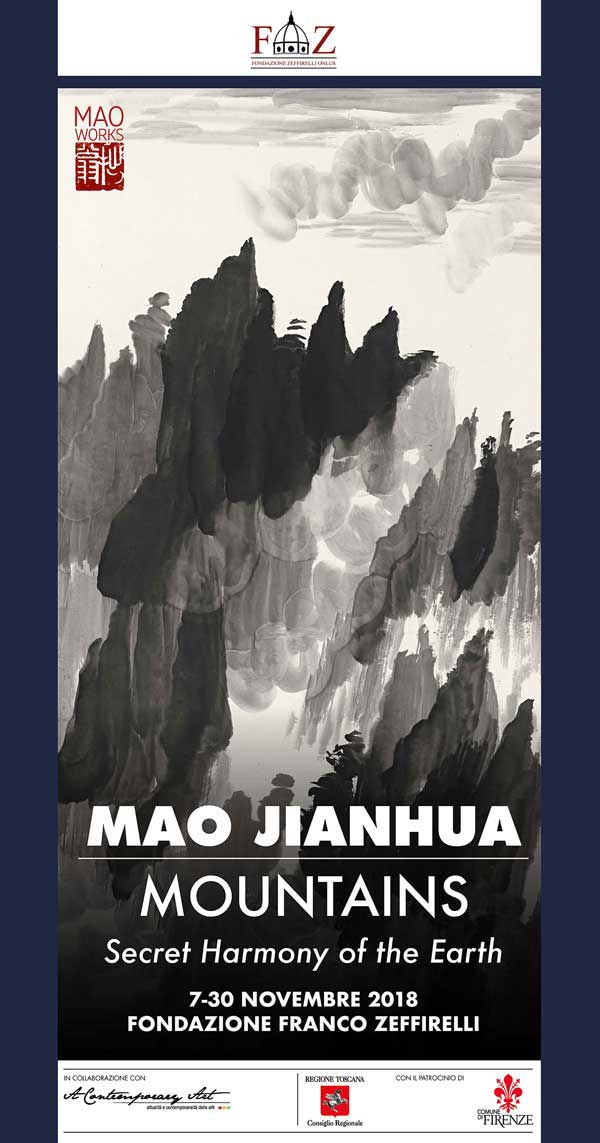