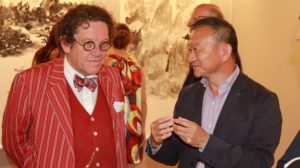 Zen is the true state of life existence. Mao’s paintings root deeply in tradition but they come out as contemporary art. This is the magic of Zen, it simply happens when you are ready for it. It is the blossom of life.

Philippe Daverio’s Speech During the Inauguration of the Mao Exhibition
Today there are so many guests, would rather give up between Spain and Germany (European Cup) and the choice of the football match came to watch Mr. Mao’s exhibition, this is great, but also fully demonstrated the unique charm of this art exhibition. I am very pleased to explain to you all what you are going to see in Mr. Mao’s paintings. Look around, what we saw is one of the walls covered with marble palace hall, hanging from the ceiling in three tree chandeliers, wall is men and women show a painting. And inside these two galleries, you will feel a completely different world.
Why is the world so different? The answer is simple: in the west, we try to recreate the real world. Sometimes we can, sometimes not, because not every painter is Titian Vecellio or Joel Jonah. In China, painters do not need to reproduce the real world, but they emphasize the spiritual aspect of expressing reality. This is a whole new concept for us. Our western idea is practical, material, Chinese thinking in different dimensions, and you will enjoy the Mao’s paintings, even beyond the China spiritual dimension we usually understand. I believe many people here know China very well. I’m not an expert on it, but I’m interested in Chinese antiques, Chinese culture and Chinese architecture.
We have been wrong to think that outside the Italy Bay is the eastern world of Trieste. As a matter of fact, every part of the eastern world is very different, and China is much older than Europe. As early as our civilization has not yet come into being, they have made many extraordinary innovations. For example, in the 221 BC before Christ – so much before the birth of the Roman Empire – the Chinese dug a very complicated Beijing Hangzhou the Grande Cаnale.
We must try to understand some of the characteristics of China. The first is their sense of timing. For us, time may be the cycle, perhaps the end of mankind, from the beginning of time to the end of the earth. This theory originated in eastern India, rather than China, which was accepted by the Greeks and was eventually widely spread among Christians. But we have a different theory: in fact, the Greeks on there is a different title time and they called it aiòn, that is a starting point and end point of the combined cycle. This view and Chinese time view to some extent are similar, so some scholars believe that this confirms the Romans had travelled to Chinese, and others think that the Romans and Chinese follow the same rules.
To understand China, we have too many things to study. The following three views can be taken as a rough summary. The first is extracted from the teachings of Confucius. He believes that the existence of the world is closely related to society. There are all kinds of human activities in society, some only associated with the upper classes or the nobility, while others are more closely related to the working class, and different classes follow different laws. This is quite different from our western ideas. We’re all egos at heart, and they’re not. In addition, they have two views. One is from Buddhism, and the achievement of personal development is the result of its karma; the other is the traditional Chinese thought “Dao”, which means that the final destination is not the most important, but the important one is the journey to the destination. Thus, in the point of view of the Tao, what is important is action. It is cognition, growth, and intuition.
Mao’s originality lies in the fact that he is a painter who really integrates “Tao” into his works. His work, study and perception are all in the Tao, and the tracks of life are all in the Tao. He is an aspiring entrepreneur, but unlike Italy entrepreneurs, he does not see his company as an independent part of the world, but as part of the integration of society. His vision is not limited to the economy, but also to the whole. This view of existence, in the course of learning painting, also enables him to become a teacher, a teacher, and a teacher. To make use of the language of painting, the artist needs to clear your mind of painting, pen out of cardiac, smooth road show. So show the endless wit actually rooted in the nature of sentiment, because in nature really implies that people cannot feel the truth and divinity in the secular world.
Each painting is Mao’s interpretation of the real existence, I am from him to write speed and arbitrarily to understand this point. This pen speed, straightforward and naive is the real painting, and through which we can enter the real. And our concept of painting is very different. Aristotle believes that painting is a reproduction of the real world, it allows us to learn to feel, to learn to comprehend, and this is in stark contrast to our data to understand the world. And Platon believes that some things exist beyond our real world, and our intuition can guide the landing of our thoughts. These two ideas of Aristotle and Platon have been guiding us all the time since ancient Greece. Chinese different from us, they don’t have to struggle in the two different schools of philosophy, because they follow another road, this road is reflected in the human existence, through imitation and connected with the world, and learn how to live, how to understand the world we live in.
Nature is the most fundamental here!
That’s why you don’t see people in these paintings.